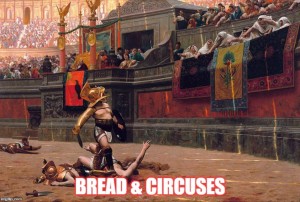 As the Roman grain dole, begun in the 2nd Century BCE, was supposed to be the solution to the massive displacement of paid labour by slaves, so the Universal Basic Income (UBI) is touted as the solution to the displacement of modern day labour by robots or automation. Although the outcome of the compensation experiment for Rome was not good, UBI may be just the perfect solution for the 21st Century’s similar problem. Or it may prove just as deleterious.

At the end of the 3rd Century BCE Rome became master of the Mediterranean after crushing its most substantial rival, Carthage. One consequential outcome of Scipio Africanus’ victory over Hannibal was the long term explosive flow of slaves into the Roman heartland. For example,  “in 167 BC Aemilius Paullus captured 150 000 people in Epirus,” and this was just one of many examples when very large numbers of people were shipped to Rome where the uber wealthy found them a much more convenient and less costly resource than their paid workers, even at the already low wages being earned.

The catastrophic economic and social results were predictable and had to be managed. Towards the end of the 2nd Century BCE, distributing free grain to the growing legions of poor became common practice. Ambitious men like Publius Clodius Pulcher, Gaius Julius Caesar, Gnaeus Pompeius Magnus (aka Pompey the Great) and others used the readily available mobs on the grain dole to undermine and eventually deliver the death knell to the Republic, paving the way for the Imperial period and the eventual demise of the Pax Romana.

Obviously slaves are not machines. But there are some significant similarities. While some may feel the need to now and again kick a recalcitrant apparatus, it is only the foot of the impatient kicker that may be injured. Other than that equipment must also be fed (energy), maintained, housed, very similar types of costs required for slaves but much lower than those for paid labour. And that is not even considering the costs of complying with labour laws, unions, the ups and downs of productivity and much more that have no equivalent in machine costs.

In the 21st Century, in recent years, there has also been much handwringing and considerable discussion about how to deal with the growing displacement of jobs by robots, from lower skilled assembly line workers to the highly educated such as those, for example, giving financial advice and much in between. These discussion forums, including the well known one at Davos, have involved both governments and those now sitting on heretofore unprecedented wealth and earning dazzling incomes. The interests of both these groups are unambiguously aligned as economic power more and more seamlessly integrates with the political infrastructure of the planet’s multitude of nation states. Both politicians and the wealthy would like to maintain social stability in a world that seems to increasingly point to an army idle labour displaced by machines in a vastly expanded cross section of work types. As noted above, It is not only in the low level jobs where workers face unemployment, it is now also the highly educated that face the grim prospect of being supplanted by clever computer programs. It is not difficult to imagine accountants, lawyers, surgeons and engineers being sidelined by highly advanced algorithms, and that’s without even considering true artificial intelligence.

On the other hand, there is the classic argument against luddites worried about automation creating armies of unemployed, which usually take as an article of faith that because automation always created more and better jobs than were lost it will always do so. Whether the jobs were better is debatable but that they were more plentiful is not contentious. This certainly was the case during the Industrial Revolution (c. 1760 – 1830). It was also what happened until the waning years of the 20th century as new technologies and entrepreneurial initiatives in transportation, services, manufacturing and, of course, in computing power created an explosion of employment in new types of work.

But everything comes to an end. There is no trend that is eternal. All things, both good and bad must eventually expire.

It is tempting to say that “this time is different,” a phrase that has come back to haunt its speakers time and again. It is routinely intoned by a chorus of greedy optimists each time security or real estate markets reach stratospheric highs. And each time reality inevitably  kicks it in the teeth, leaving catastrophes like the 2001 dot bomb and 2008 financial collapse in its wake.

And in the sense that automation cannot possibly continue to create new and better employment forever, this time is no different either. And, unless it is addressed with intelligence and good faith, it will eventually have deleterious consequences for democracy, social systems, peace and good order. A growing mob of working poor and unemployed, which will number in its ranks those who previously felt secure in well paid professions, will not be good for anyone, including those accumulating all the wealth.

It is why the very rich are also part of the debate. It is quite important, though, that their concern should not be mistaken for altruism or empathy. That would be delusional and lead only to unworkable solutions. It should be taken as given that their apprehensions are driven entirely by self-interest, as was the grain dole in Ancient Rome. It is hardly credible to think that the gentlemen of the Roman nobility, mentioned earlier, Publius Clodius Pulcher et al, had any deep connections with the masses, no more than did the medieval nobility or, as we like to call them today, in our more ecumenically sensitive times, the elite. But that is normal human behaviour which, whether we approve or not, is a fact we must live with and get on with thinking about solutions to the automation problem in that context of unvarnished realism.

While on the theme of human behaviour, once the Roman gentry weaned themselves off the rabble as a source of labour, relying on the much more convenient supply of slaves, they found plenty of time to turn on each other. This produced interesting ways to describe certain periods in Rome’s history, like the year of the three emperors and the year of the five emperors when the powerful, with an unlimited supply of cannon fodder (perhaps spear and sword fodder would be more appropriate), engaged in the ultimate competition for the “purple.”.

It is not unimaginable that modern elite would do the same, having at hand unlimited mob and troop material. They are not, it is quite important to keep in mind, a monolithic group of natural allies. They already engage in vigorous competition in the what passes for a marketplace but is in reality a monopolistic arena (an oligarchy in other jurisdictions). For this crowd, making the transition to a more hostile, deadlier competition would not be as large a step as might be thought.

So, back to the main story, the UBI. Once again, there is a building problem, clearly recognized by the major actors, the uber wealthy and their compliant governments. To be fair, all power blocs do not have the same cozy arrangements. Some are more progressive than others, at least in the short term. While China and America, among the giant economic actors have morbidly severe income/wealth inequalities and serious government-industry inbreeding, Europe seems to be making, at present, a valiant effort to keep the baying hounds of libertarian markets more tightly leashed. Libertarian, of course, does not rhyme with fair.

The UBI could be a good thing if it were tied to a rebalancing of income and wealth distribution, and not an attempt to eliminate entirely the inequalities, which would like be impossible, but just to make them less extreme.

However, a UBI, that is substantially nothing more than a modern Roman grain dole will not work. And it wasn’t only bread that the ancient nobility, from the emperor on down, handed out to the poor. There were the endless games and publicly financed festivals (the famous bread and circuses combo) which distracted the plebes for good parts of each year. An information piece from capitolium.org highlights the political/social control aspect of these games and the grain dole: “It was Juvenal that coined this system, a mechanism of influential power over the Roman mass. ‘Panem et Circensus,’ literally ‘Bread and Circuses,’ was the formula…., and thus a political strategy…..an efficient instrument in the hands of the Emperors to keep the population peaceful and at the same time giving them the opportunity to voice themselves…” It is not a stretch to imagine the current industrial entertainment complex, running from straight out family entertainment to more gladiatorial events like mixed martial arts all owned by both governments and the uber rich, serving the same purpose as the circus end of the bread and circuses tandem.

One possible alternative or, I daresay, an enhanced UBI, and already proposed by Bill Gates and others, would provide some way for the masses to share in the bounty produced by automation. A way that likely involves a stake in the robots that have displaced them, a stake with growing returns. This would, of course, solve the problem, not addressed here, of impecunious, unemployed, poor consumers unable to purchase the output of all this automation.

However, if we consider history as little more than the story of human nature, there is but a very small probability that the private wealth – government complex will make a good decision. Humans are hampered by the evolutionary baggage of short term thinking and it would take an indifferent Hobbesian Leviathan or a Platonic Philosopher King to look to the long term welfare of society. That either of these will emerge to direct thinking about the displacement problem is a vanishingly small likelihood.