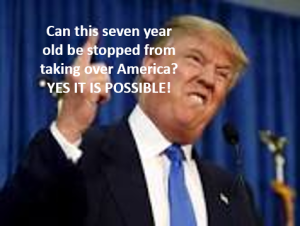 The way to stop the man with the seven year old mind, no better than a schoolyard bully, Donald Trump, is not very complicated. All that is needed is the will to keep America from becoming the toy of a very small minded, extraordinarily thin skinned Mr. Trump and the way is clear. And it is not by asking the electors to vote in Hilary Clinton. That would not go over very well since the Republicans did carry the day playing by the Electoral College rules. It might be gratifying for Democrats, as Clinton did win the popular vote, but it would be unfair.

The way would be for the 232 electors set to vote for Clinton to consider, instead, voting for someone from the so-called moderate wing of the Republican party. It could be Lindsey Graham, George Pataki, Colin Powell or any of the 50 or so people from that moderate wing. Such a gesture will, hopefully, show the way for many of those Republican electors who, after sober reflection, have also been considering how to keep America safely out of a child’s hands. Along with the 232 Democrat votes, only 39 such courageous men and women would be needed from GOP ranks to put a stop to the terrifying nightmare that is a Donald Trump presidency.