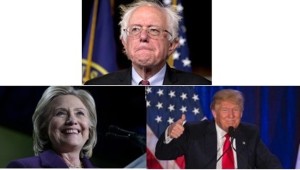 The big worry is that an unhinged Trump will be swinging his big campaign dumpster towards moderation and reason, so reworking his Neolithic image into something more 21st century presidential. This concern is misplaced, as his advisers bewilder even the GOP experts. Judging from Trump’s recent speech unveiling his nutbar foreign policy, and the reaction to his wisdom, “The Most Striking Aspect Of The Speech Was Its Repeated Contradictions,” “Populist Pandering Masquerading As A Strategy”, these advisers are not from the school of elite policy wonks. He will end up but trading outrageous bluster for incoherent inanities spoken, albeit, very presidential.

Strange as this may seem, Trump, the political thug, may be far less harmful to America and, by extension, the world, than Hilary. The conventional wisdom, the same sort that assured us Trump would never survive the primaries, is that the disenfranchised, those casualties of liberal trade policies and growing income inequality, are the ones swarming to his camp. While there are some of those, most are of an uglier variety. You see, Trump knows how to appeal to two million year old homo erectus basic instincts. Instincts that tend to neatly short circuit intelligence. Take, for example the lure of sexual adventure, which has a top physicist languishing in an Argentinian jail. Or General Petraeus, who flushed his brilliant career down the proverbial toilet for Paula Broadwell. For Trump, it is the race card and deep seated resentment that a black man has taken over America, which he plays to the hilt. Let us not count his musings about incest with his daughter or the potential bosom size of his newest grandchild as playing the sex card.

Trump is but a dangerous thug, with the behaviour patterns of a five year old (“I know lots of words, I have lots of money, he started it, and so on”). If elected, and that is much more likely against Hilary than Bernie, he may destroy the world but more likely will be thwarted from such fatal actions by most institutions in America, whether congress, the military, the plutocracy, all of the previous.

Hilary, on the other hand, has her hammer at the ready to knock the final nails into America’s democratic coffin. She has handed out an uncountable number of IOU’s to the people who believe rich folk should have more votes than those of lesser wealth. The crumbling foundation of a democratic society, equality of opportunity, will be swept away for good after eight years of a Clinton Princeps. And, to the extent that such a system has never, in all of recorder history, been sustainable, Clinton will irreversibly embed in America the path towards chaos.

This why Bernie must be a presidential candidate, even if it means the I word, running as an independent. What about the fears of Bernie guaranteeing a Trump presidency by splitting the Democratic vote, through an independent run? Nonsense. It would almost certainly be a three way race since Bernie would pick up not only dissatisfied Republican voters but a large majority of Independents, as well as the huge numbers he already has of Democratic supporters. He may not win a majority but will almost certainly capture a plurality of votes, both popular and in the electoral college.

So, if the Democratic Party doesn’t see the light at their convention and the super delegates don’t all rally to Bernie, to give him the nomination, he should definitely run as an independent and save the world (or the “common people,” if “the world” is too melodramatic for the staider amongst you readers).